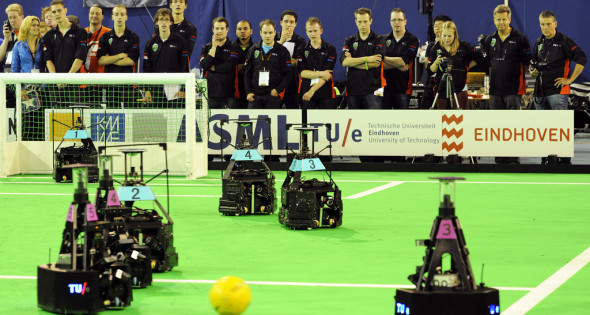 Dutch teams are active in a number of leagues. Today and tomorrow, they will show their worth several times. Below is a short overview of the schedules of Dutch teams in five different leagues: Middle Size soccer, AdultSize Humanoid soccer, Standard Platform soccer, RoboCup@Home and RoboCup@Work.

Tech United Eindhoven has several matches to play today. At 9AM, they played against the Chinese team BITAC. Another Chinese team, NuBot, will be their opponent at 11:30h. Another game will be played against Carpe Noctem from Germany at 3PM. Depending on their final position in the current pool, they may play in the semi-finals or even the final! The latter will take place on Sunday at 3PM.

In this league, Tech United Eindhoven will once again be participating. Soccer robot TUlip plays in the semi-finals on Saturday at 14:30h. His opponent is HuroEvolution AD from Taiwan. The final match is on Sunday morning at 10 o’clock.

The Dutch NAO Team from Amsterdam participates in the Standard Platform League; at 12PM today they play in the second Round Robin. Later today, the quarter finals will take place, starting at 5PM. On Sunday, the semi-finals and the final match will be played between 9AM and 1:30PM.

There is also a Dutch team in the RoboCup@Work League: Swarmlab@Work from Maastricht University. At 10AM and 1PM, the Conveyor Belt tests will take place. The Precise Placement tests are scheduled to take place at 3PM and 6PM. On Sunday, the final will take place at 10AM.

Several Dutch teams participate in the Junior League as well. It is definitely worth taking a look at the Junior venue as well!