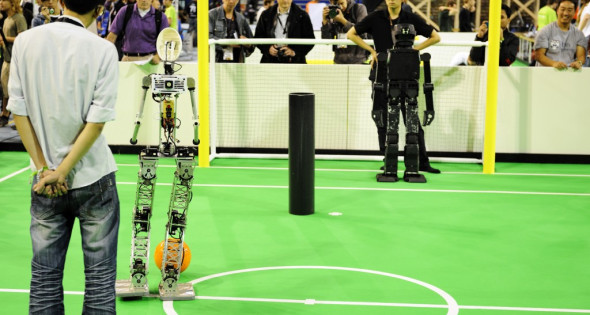 The robot from the Japanese JoiTech team (seen in goal in the photo) won an exciting RoboCup 2013 final against HuroEvolution AD from Taiwan. The match – a penalty race in which both robots had five shots at goal ­– ended with a score of 4-3. The Eindhoven team Tech United had earlier lost the runners-up final by 1-0 to the Chinese team Tsinghua Hephaestus.

The Humanoid League is a contest between ‘human-like’ robots with arms and legs. In de Adult Size League, one robot first takes the penalty shots and then plays in goal when it’s the opposing side’s turn to shoot. The ball is placed behind the robot, which then has to recognize and locate it. Adult Size are the biggest robots in the Humanoid League: they have to be at least 130 centimeters tall.

The Adult Size final saw JoiTech from Japan take an early lead, when their robot managed to stop a penalty shot by their opponents from Taiwan who had beaten Tech United in the semi-final. But then JoiTech’s robot couldn’t find the ball when it was his turn to take a penalty shot, making the score even again. However the Japanese team went back into the lead when the next shot by the Taiwan team’s robot hit the goalpost. So at the end of the match the winners were the JoiTech team from Japan, giving them the World Champions title for the coming year!