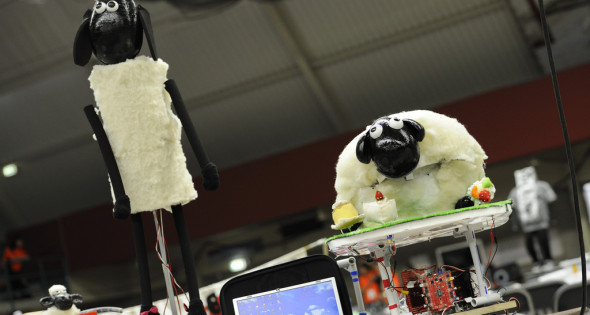 Walking through the hall of the Ice Skating Centre (the venue of the RoboCupJunior League), you can see fields for the Junior Rescue competition and tables with soccer fields all around you. But on Thursday afternoon, the focus lies on one thing only: the Junior Dance League, in which children perform a dance show on stage, together with their own robots.

In this creative competition there are two subdivisions; the Primary and the Secondary league, for pupils of primary and secondary education. In both divisions, the contestants have 5 minutes in total to introduce themselves and to perform their show. Everything is made by the kids themselves with the help of a mentor, from the robots themselves to the clothes they and the children wear on stage.

Most acts are framed by an attractive stage setting. Several teams build a complete decor – within their five minutes – before they start their actual show. Among the decorations were a standard with moving flowers, an entire wedding ceremony and a complete circus. Shaun the Sheep, as seen on TV, made an appearance in one of the shows as well.

The teams originate from various countries and consist of children up to 19 years of age. The youngest participants in this edition of RoboCup (from the British team ‘007’) are 7 and 8 years of age. Team 007 had a beautiful display and, naturally, had a James Bond story incorporated into their show. Another remarkable performance was given by team Visionaries in the Secondary League. There were two girls on stage who controlled their robots through robot hands which they wore themselves. The robots mimicked their exact movements on the music.

Realising that everything on display on stage is produced by the children themselves, you can only be impressed by what you see. It is apparent that the youths embrace robotics in their own way. The Junior Dance League forms a beautiful combination of technology, music and creativity.