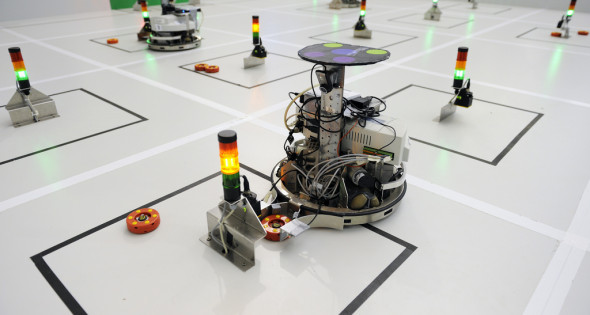 In addition to the well-known soccer, care and rescue robots, there are also robots at RoboCup competing in less known competitions. Two of these competitions are the RoboCup@Work League, with teams searching for applications for robots in work environments (in some respects, it is comparable with the RoboCup@Home League), and the Festo Logistics League, sponsored by Festo Germany and perhaps the least known competition. Wim Kluiters from Festo NL explains what this competition is all about and what they try to achieve with it.

The Festo Logistics League is about three robots being able to solve a logistic challenge together. The robots move through an arena – which looks rather abstract for the audience – and together have to deliver five products. The robots (‘Robotinos’) are the same for each team, as well as the software that comes with them, but every team has the freedom to alter the robots: for instance, they can add extra sensors.

‘Products’ (hockey pucks) have to be processed by a certain number of ‘machines’ during a game. The robots mainly determine their position within the arena using light sensors and lasers. The squares containing the machines (which are recognized by the traffic lights on top, and which lights are burning) for instance, have black borders, while the rest of the floor has a light colour. The locations of the different machines are not known in advance, and the robots have to make their decisions fully autonomously.

The three robots in the arena have to carry out a number of processes to complete the entire assignment. First, they scan all traffic lights to know which type of machine is located in which position. Then they collect one or more products, lead their product(s) through the appropriate machines and lastly, deliver them at one of the ‘gates’ (which could be the loading point of a truck in reality). Teams earn 5 points for each properly executed task and lose 3 points in case of a failure.

Eventually, the goal of the Festo Logistics League is to implement a fully automated system in, for instance, a factory or storage room. In some cases, such a system is already in use, but of course there is always room for improvement. More work is also necessary before the robots from the RoboCup@Work League can really be implemented in work environments. Here at RoboCup, big steps are taken into the right direction!