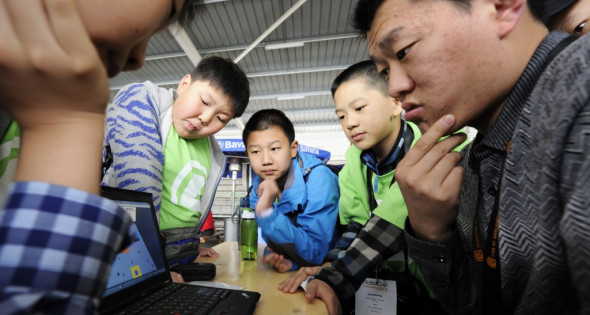 Lots of talent in the Junior League

Although it’s the Major League – in which university teams compete against each other – that always gets the most attention, the Junior League is just as important. Because that’s where you’ll find the robot builders who in the future will have the task of further developing the robots in the Major League. RoboCup 2013’s editors took a look in the Eindhoven Ice Sports Center, which has been transformed into a robot Valhalla.

The hall which normally sees ice hockey and ice dancing – at least, if the photos on display there are anything to go by – is now filled with tables of computers, robots and playing areas where the robots show what they can do. For the participants in the Junior League, who’ve come from as far away as Japan and the USA, the matches are a very serious business as they run constantly from the playing area back to their laptops to fine-tune the robots. While others have spent so much time on setting-up that they’ve fallen asleep behind their laptops.

The soccer robots in the Junior League look a lot like those in the Small Size League. Both types of robots are cylindrical and super-fast. The Junior League robots have a bit less control of the ball and there’s not so much team play. But the matches are no less exciting: the lightning moves of the forwards mean a misdirected ball can suddenly be transformed into a goal.

But what gets the most attention of all is the stage at the back of the hall. That’s where robots are the stars of theater and dance shows in front of a packed audience. The performances follow each other in a high-speed sequence: each group gets five minutes to present their show to the jury. If you take a seat for a quarter of an hour you might see two girls, who can’t be more than nine years old, dancing while the robots they’ve built themselves ‘play’ Abba, a group of girls staging a play in which their robots get lost in the jungle, or six boys who continue to dance as if there’s nothing wrong while their robot – which should have stolen the show – is out of action.

All the participants couldn’t be more enthusiastic. And around ten years from now we may even see some of the older ones among them in the Major League.