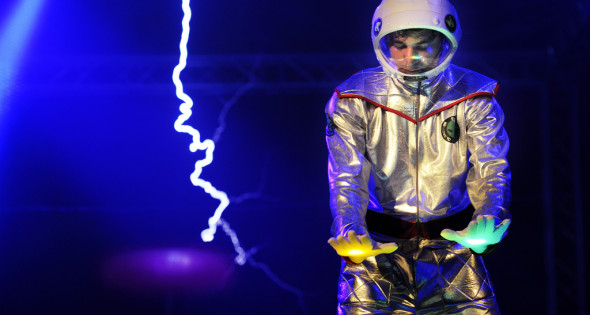 The RoboCup 2013 World Championships have officially been opened this afternoon at 4 PM. In the tent, also home of the Robot Playground, a few words of welcome were said to the participants and visitors, and words of thanks to the sponsors for their support of the event.

After the speeches, an astonishing show was given on stage. The show was opened with a spectacular music performance making use of lightning! Then a tight performance was given by a dance crew. Between the performances, video clips were shown about the organisation of RoboCup. The last part of the show consisted of dancers in illuminated robot costumes (of course mascot Robin made an appearance as well) and the opening of RoboCup 2013 was announced.

The reactions to the ceremony from the audience and the coordinators were all positive. The atmosphere was very good; this bodes well for the next few days!