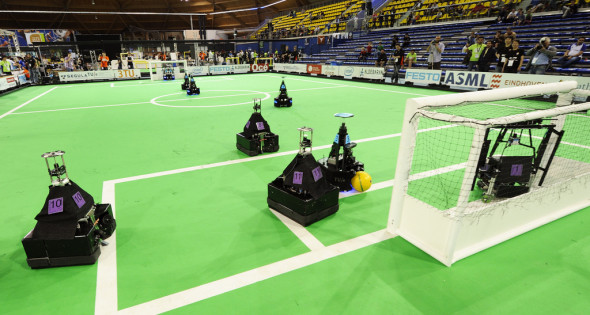 On the first day of the tournament for the Middle Size League, one of the first games was between the world champions, Tech United Eindhoven, and IsePorto from Portugal. This game was planned to start at 9 AM, while Bitac from China and MRL from Iran would compete on the other fiels.

Technical problems caused Bitac-MRL to be paused after a few minutes, and caused the Tech United-IsePorto game to be cancelled. Tech United won by default (3-0) because the opponent was not ready to play. Unfortunately for Tech United, this means that they have not been able to show themselves on the field yet, but there will be more chances today and in the next few days. Bitac-MRL was resumed after about half an hour.

Tactics are getting more and more important in the games. The rule that the ball has to be passed over the middle line before it is allowed to score a goal was set last year, but it seems to be difficult in practice and sometimes leads to rejected goals. However, it is clearly notable how the games are evolving: in all teams, there is better team work and more passing of the ball between the robots.

The first goal of the tournament was scored by Bitac in the second half of the game, making the final score 1-0. Throughout the day, there matches are played on both fields (A and B). The last games are planned to be played at 6 PM.