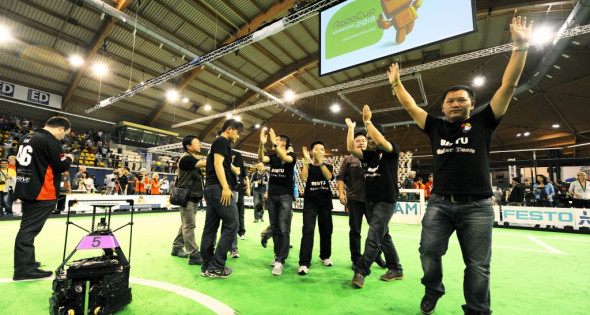 Previously achieved results are no guarantee for the future, as was demonstrated once again in the final match of the Middle Size League. Team Tech United Eindhoven had reached the final unbeaten and without a single goal against them, but the Chinese team Water turned out to be the stronger party in the final.

The match was kicked off by Rob van Gijzel, the mayor of Eindhoven. A short way into the first half of the game, Tech United received their first counter-goal of the tournament. Just before the end of the first half, they managed to come back: 1-1. The audience went wild, along with the Turtle mascot who danced and jumped around.

Shortly after the start of the second half, Water returned with another shot straight at the goal – the Tech United goalie was too late to stop it, and the standings were 2-1 for the Chinese team. The match remained nerve-wracking, especially for the (human) Tech United supporters. Although there were some nice passes as well as several more scoring opportunities for the Dutch team, team Water was very strong in the defense.

But then one of the Tech United TURTLEs presented a big surprise: in the last few seconds before the end signal, another goal made the standings 2-2! After a short discussion between the referees, it was decided to prolong the game by two times 5 minutes. During the first prolongation, Water scored again. The second 5 minutes went by without any more goals; Water defeated Tech United with 3-2. Team Water now has the honour of playing a demonstration game against a human team.

Although last year’s world champions were disappointed, the second place is of course a wonderful achievement. And there was more success for Tech United today: the RoboCup@Home team won 3rd place in their league with robot AMIGO.