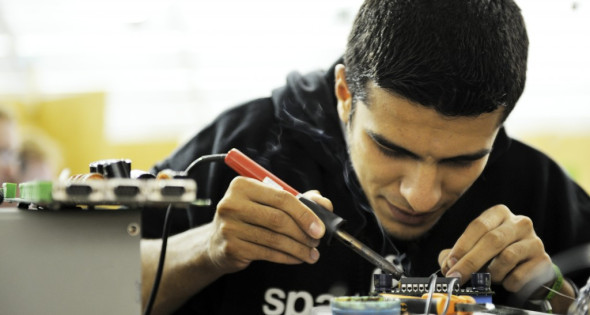 Every team at RoboCup wants to win. But they’re also here to learn – from each other. They can adopt smart tips & tricks from each other, which accelerates the process of developing the ideal robot.

On Wednesday many of the teams in the Middle Size League might well have looked with envy at the German team. They came up with a smart new idea in the scientific challenge, in which the teams show their latest ideas to improve the robots.

Most robots in the Middle Size League use a camera that looks upwards at a convex mirror, which gives them a 360 degree all-round view. But the German team came up with something smarter: the camera itself is located inside a concave mirror, where it receives the reflected view from the upper camera. That gives the robot two simultaneous information flows, on the basis of which it can construct a 3D image. In practice that means the robots are better at tracking the ball.

Yes, two members of the Eindhoven team Tech United confirm, there’s a good chance that they’ll also use this technique in the near future. Because when a promising new finding shows up, the other teams start to read the published papers about it and try to find the best way to integrate it in their own robots.

We saw a similar development in the Middle Size League with the rollers used to control the ball. The teams that started to use this technique had a big advantage: their robots had more secure control of the ball, and were also able to travel backwards with the ball.

Learning also takes place between the different classes. For example Tech United’s service robot used the same platform as the team’s soccer robots. And the Kinect motion-sensing device, which is used in some game computers, also made its appearance in several different leagues.

Copying other teams’ technologies may look a bit like cheating, but the aim of RoboCup is to accelerate the speed of development in robotics. And those developments will be faster if everyone can always start at the same level.

Competitors in the @Home League even think the teams don’t copy enough from each other. Janno Lunenburg, @Home team leader from Eindhoven’s Tech United, says the scientific challenge doesn’t produce enough innovations, even though the most successful robots look suspiciously alike. “There isn’t as much technology transfer as we’d like to see”, says Lunenburg. “Many teams are now using the Robot Operating System. And if all the teams have comparable systems we hope that will happen a lot more.”