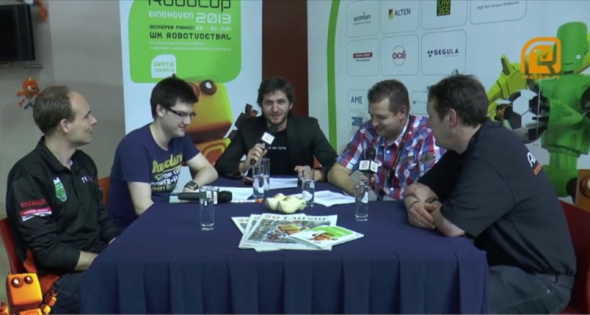 Tonight in Today @RoboCup: Rescue Robots on the table

Tonight, there will be special attention for the Rescue League in the daily talk show Today @RoboCup. One of the organizers of the Rescue League will join host Lieven Scheire and side kick Guy. He will take one of the rescue robots with him as well.

In the Rescue League, the robots enter hard-to-access buildings to find victims and transmit their locations to the base station. A twin brother of one of the robots was used after the Fukushima nuclear disaster. It entered areas that were too hazardous for people, where it had to carry out measurements to help decide whether the area was safe for people to enter.

Besides, Lieven and Guy will look forward to Sunday, when the deciding games will be played. Tech United is one of the most likely winners in the Middle Size League. The Dutch team didn’t lose a match during this tournament and until today no team succeeded to score against Tech United.

Today @RoboCup will be broadcasted at 21h Central European Time on RoboCuptv. Take a look at the Friday’s broadcast below or all RoboCup’s videos on YouTube.