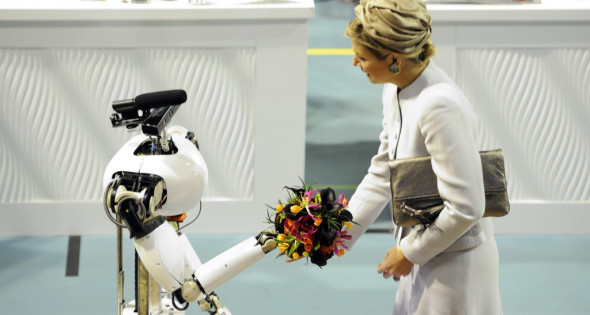 A special experience for Queen Máxima

RoboCup 2013 had a high-level visitor on Friday afternoon: nobody less than Queen Máxima came to see the robots in action and talked to the leaders of Eindhoven’s Tech United team. While she was there the queen had a very special experience: she was presented with flowers and a drink by service robot AMIGO, and watched one of the most exciting soccer matches up to now.

With a little hesitation, Queen Máxima accepted the flowers from service robot AMIGO on her arrival. It wasn’t until she was sure that the robot had really let go of the flowers that she took hold of them and politely thanked the robot.

Later the queen enjoyed one of the most exciting soccer matches played up to now in the Middle Size League. Tech United played a demonstration match against the Chinese team, which the Eindhoven team won by 2-0. It was a spectacular game, with some fine goals and great saves by the keeper.

“We already played against the Chinese team yesterday, but that wasn’t quite such a good game”, said team captain Robin Soetens. “But what we saw today was great.” During the match Robin answered questions from Máxima, who wanted to know how the robots work and how they communicate. “She was really interested.”

In the arena for the @Home League, service robot AMIGO showed that he’s been well educated. Although he had some trouble at first in recognizing Máxima’s name, from then on he addressed her politely as “Your majesty”. Then he offered her a 7 Up or a cola. “She would have preferred water”, said Janno Lunenburg, captain of Tech United’s @Home team. “But that isn’t part of RoboCup’s range of refreshments.”

For Janno and his team the visit meant hard work. After handing flowers to Máxima on her arrival, their robot AMIGO had to present a drink no more than three-quarters of an hour later at the other side of the RoboCup 2013 complex. “We had to get AMIGO back to the @Home arena and set him up again. After that we didn’t really have any time to test him again. In situations like that it’s always exciting to see if everything will work properly.”