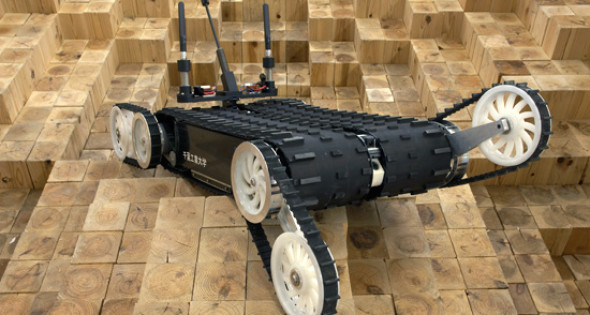 The robot that worked in Fukushima

Everyday use of robots isn’t just a future dream. Some of the robots you’ll see at RoboCup 2013 have already showed what they can do. For example after the Fukushima nuclear disaster, the twin brother of rescue robot Quince from Sendai University in Japan entered areas that were too hazardous for people. RoboCup was an important factor in the robot’s development: “Without RoboCup there’d be no Quince”.

Quince stars in the Rescue League, in which the robots enter hard-to-access buildings to find ‘victims’ and transmit their locations to the base station. But in Fukushima the robot had a very different task: he had to carry out measurements to help decide whether the area was safe for people to enter.

The old version of Quince had a few limitations. For example team captain Sotoshi Tedokoro was worried that that the robot might fall when it had to climb the steep stairs in the building. That’s why Quince has now been improved: his twin bother is better at climbing up steep surfaces, and he also has some new sensors that carry out vital measurements.

Based on the resulting data rescuers can decide whether people can enter the area, how long they’re allowed to stay there and if they need to take any special measures. Which means the information can literally save lives. Quince’s twin brother has now gone into action successfully ten times since June 2011.

RoboCup has made a big contribution to Quince, says team captain Tedokoro. “The robot is based entirely on what we’ve learned in the competition. It’s given us the chance to test Quince in action, and to make further improvements.”

Take a look at the pictures below made by the robot in Fukushima.