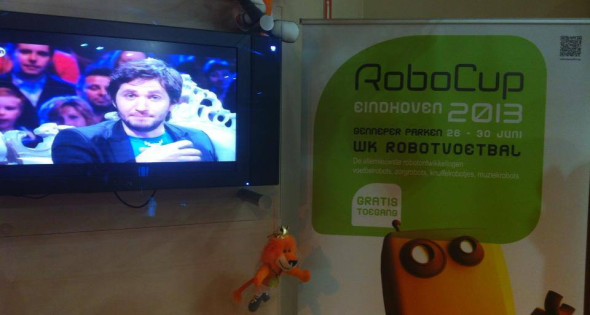 RoboCup 2013 will broadcast a talkshow on Wednesday at 21h local time. Lieven Scheire, who is known in the Netherlands and Belgium because he placed a shipping container before the main entrance of the Belgium mobile company Mobistar, will talk with guests about the first tournament day and look forward to the rest of the RoboCup.

Guy, who is the commentator on the live stream, is the initiator of the talk show. He will give commentary about the first day of the tournament. Besides, two teamcaptains of Tech United-team from Eindhoven will join host Lieven Scheire and talk about the coming days.

Scheire: ‘I spoke with some players and they take the tournament very seriously. They talk in general soccer terms, ‘the group of death’ for example. That is how I want to approach the tournament in the talk show. I want to know which teams are likely winners, of which team Tech United is afraid of.’