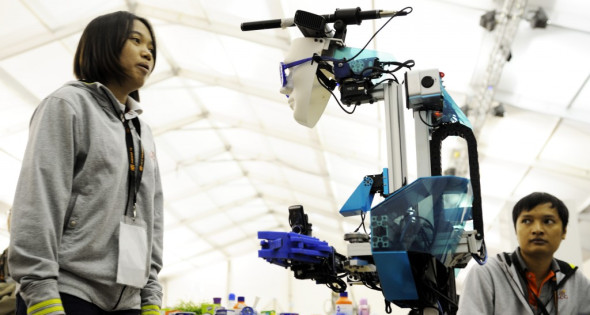 Robots keep track of their owners

It was already announced as one of the highlights of the second day of RoboCup 2013: the Follow Me test in the @Home League. In this test the service robots have to keep following their owners among lots of other people. Some of the robots couldn’t decide which direction to take, but others were surprisingly good at their task.

The route that had been laid out led to an ‘elevator’. On the way there the robot’s view was interrupted by a person walking between the robot and its owner. And once it was in the elevator the robot had to be the first to leave, and then had to wait for and follow its owner.

The biggest challenge of the test was a wall of people, one of whom was the owner who had disappeared among the others. The robot then had to go round all the people and find his owner again, without wrongly recognizing someone else.

Most of the robots didn’t get any further than the elevator. The robot of the Dong Yang team from Thailand lost the person it had to follow right from the start, because its wheels started to slip when it tried to follow at high speed. “We tested him just before the official test and we didn’t have that problem then”, said one of the team members.

The Mexican robot Donaxi also didn’t get any further than a few meters. This robot uses a laser to detect the person it has to follow, but the team have had problems for quite some time in finding the owner if he’s walking while the robot is standing still.

Robot Lumyai from Thailand managed to reach the elevator, and as well as that was the first to leave it, exactly as required. But it couldn’t handle the wall of people. “In fact our robot wasn’t able to go any further”, explained the team leader, “because we haven’t yet written the code for walking around the wall of people.”

He also knows why Lumyai was able to go further than most of the other robots. “The challenge is to locate the owner after he’s briefly gone off the radar. We’ve solved that by having the robot search using a normal camera and a Kinect motion-sensing device. As we’ve seen, most of the other teams are still struggling with the same problem.”